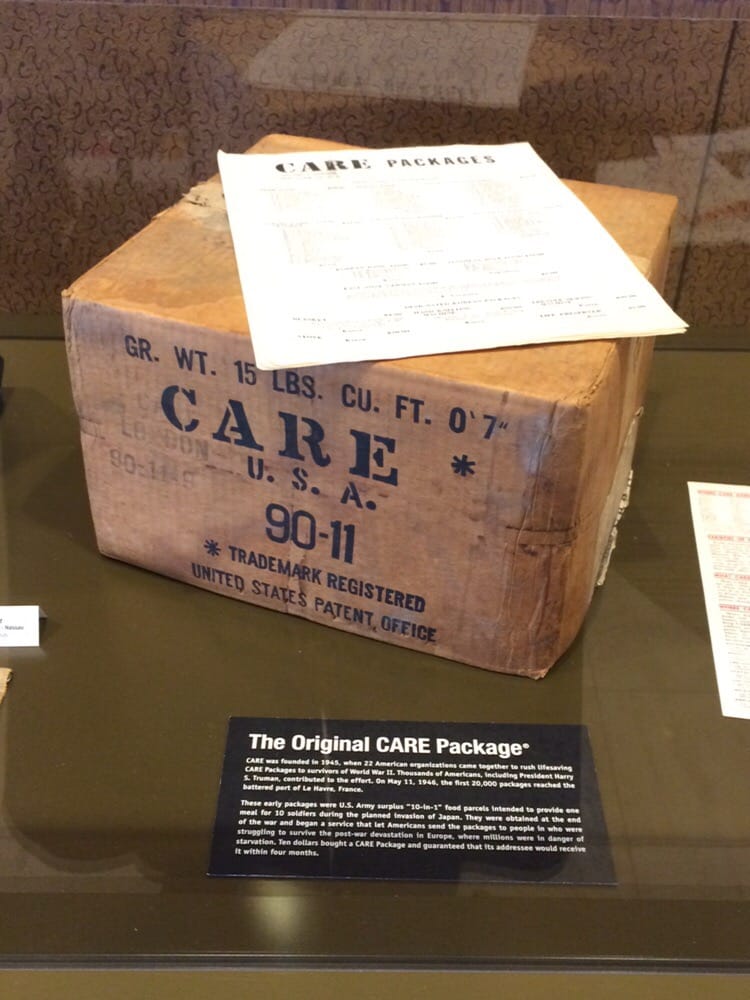 Did you know that the phrase care packages is actually a registered trademark? In 1945, a humanitarian organization called Cooperative for American Remittances to Europe (CARE) began a program to send U.S. Army surplus food parcels to friends and family who survived World War II in Europe.

The Army had prepared 10-in-1 food parcels for an extensive invasion of Japan, but when the invasion did not occur due to the atomic bombs dropped in August 1945 and Japan’s subsequent surrender, the Army found itself with all this additional food.

CARE petitioned that it be allowed to send 10-in-1 parcels overseas. Americans could purchase them for $10 and could send them to anyone they knew in Europe. CARE was committed to delivering the packages in four months and allowed Americans to label a package to someone in Europe without an address and would attempt to deliver the package to the last known address.

On May 11, 1946, World War II survivors in Le Havre, France received the first 15,000 packages. After the Army surplus packages ran out, CARE began to put together its own packages, later adding non-food items.

CARE packages were much more practical than today’s care packages for the military. The recipients acquired much needed nutrients and important materials for survival like tools, blankets, books, clothing, and medicine.

Survivors loved receiving CARE packages just like our military members enjoy them today. In fact, CARE shared a neat story on its website about one couple who found love in a care package.

German Helga Glembowski lived in Bavaria and met American soldier Leo Kissell after the war at her uncle’s camera shop. When Leo returned to the states, he began corresponding with Helga. In one of her letters, Helga mentioned how hard it was to come by food and how one of their neighbors had received an amazing CARE package.

Back then, $10 was an extremely large amount of money, especially for someone like Leo who was currently attending college. Even so, he scraped together the money to send a CARE package to Helga and her family. Helga remembers how much she enjoyed receiving the package. The two continued to correspond and fell in love through their letters. Helga came to the United States to marry Leo, and they had been married for 66 years in 2015.

Later, CARE expanded from just sending packages to countries in Europe, as in the case of Helga who lived in Germany, to including countries in Asia and Latin America. CARE also adapted to allow Americans to designate a generic recipient instead of a specific one. Rather than having to put down the name of a relative, you could address package to “a school teacher in Germany,” and CARE would distribute the package.

In the 1960s, CARE began to focus more on emergency relief and long-term projects and phased out the packages. Today, CARE considers itself as “a leading humanitarian organization fighting global poverty,” which is evident in their more updated name: Cooperative for Assistance and Relief Everywhere. CARE may no longer send care packages, but they are a symbol of CARE’s current fight against poverty in the world.

You’re probably not sending Spam or powdered eggs to your service member, and you’re probably sending more fun items than practical ones. But the sentiment is the same: taking care of someone you love who is far away. If you’ve enjoyed learning more about the origin of military care packages, there are several ways you can get involved!

First, you can answer the question: What would you make with food from the original CARE package? CARE encourages people to consider questions like how to make raisins and coffee or spam and chocolate into a meal. In fact, CARE even started a Pinterest page where they have pinned recipes based solely on the ingredients in the original CARE package.

You too can add to their collection by using the hashtag #CAREPackageRecipes! Also, feel free to shoot me an email at rachel_basinger@herocarepackages.com with any great recipes you’ve come up with based on the original CARE package!

Second, you could even consider sending your service member a version of the original CARE package, but you probably want to leave out the lard and liver loaf! If your loved one likes history as my fiancé does, it could be a fun historical-themed care package. A book about post-war Europe might also be a fun read to include like Keith Lowe’s Savage Continent.

Finally, whenever you send your loved one a care package in the future, think of all the items you would have included in 1946 like powdered eggs and whole-milk powder and of all the items your service member gets in 2018 like beef jerky, dried mangoes, and Oreos!