Exactly seventy-four years ago on June 6, 1944, almost 160,000 Allied men landed on the beaches of Normandy, France, starting at 6:30 in the morning. Today we call it D-Day. Heavily fortified by the Germans, the stretch of the Normandy beaches was 50 miles long. Operation Neptune was the code name for the landings on five different

The invasion was a success as it surprised the Germans. Even so, the Americans experienced great difficulties at Omaha and suffered heavy casualties. During the entire operation of the Normandy landings, there were over 4,000 Allied deaths and likely 4,000-9,000 German deaths. Although the war in Europe would continue for almost another year, the outcome of Operation Neptune allowed the Allies to start on a path of successive and successful German defeats, culminating in V-E Day on May 7, 1945.

During several days prior to the landings, soldiers, sailors, and airmen had the opportunity to write letters home, knowing full well that they might not make it home. They could have used V-Mail, or Victory Mail, which allowed service members and family at home to send short letters on special sheets that were then microfilmed to transport overseas and reproduced one-quarter of the original size for the recipient. The post office required 22-37 mail bags to carry 150,000 one-page letters, but with V-Mail, it could be replaced by a single mail sack. Additionally, as the USPS notes, the weight drastically decreased from 1,500-2,500 pounds to only 45 pounds. 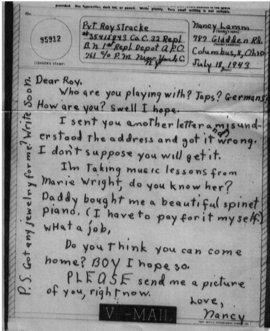 Even so, V-Mail was the World War II version of email, and service members and their family members still preferred handwritten letters to the smaller, faster, and more convenient V-Mail. In 1944 alone, sailors received 272 million pieces of regular class mail and 38 million pieces of V-Mail. Thus, of the 310 million pieces of mail received by sailors in 1944, only 12% came from V-Mail!

So, what makes letter writing so important, whether it’s 1944 or 2018? Why is writing letters to service members still valuable today even with email just like it was still valuable in 1944 even with V-Mail? (We are so committed to cards that we include a 100% personalized card, along with a pre-addressed and pre-paid postcard to write back.)

Looking at just a few letters from D-Day can teach us some lessons about why we should keep up the tradition of writing letters to our Marines, soldiers, sailors, and airmen deployed overseas in 2018 even with modern-day amenities like email, Skype, Facebook Messenger, and countless other apps.

First, letters are a way to better capture emotions, impressions, and reactions to events, big and small. Sure, an email is easy to fire off, but when something important happens, you want to talk more in-depth about it! Maybe you’re like me and want to reflect on a class discussion you had with your students on the U.S. embassy moving to Jerusalem in a letter to your fiancé deployed overseas. Or maybe you’re like Morris “Moe” Weiner and his wife Sylvia in 1944 who both wanted to reflect on the events of D-Day.

Although Moe didn’t participate in the invasion himself, he was serving in the U.S. Army Quartermaster Corps in England before and after the invasion of Normandy, and he had been eager to talk about D-Day with his wife, composing a letter on June 6, 1944:

Dearest Syl: It’s a little hard to sit down and calmly write a letter, just as though nothing were happening. Of course nothing has happened except the most world shaking event. Although I’m bursting to talk about it, I can’t. Not that I know anything; even opinions are taboo at this particular stage. However I can say I am glad that the long wearisome wait is over. How, when and wear [sic] did you first hear about it? Did you upon getting up in the morning turn on the radio, as we used to do? Or did you know earlier.

Sylvia was equally interested in the events once she had learned of the invasion. In her several-page letter dated on June 6 as well, she began by generally describing the mood in America, then moved to discussing her specific experiences, and ended with well wishes for her

Hello – My dearest – Well D-Day! It has come – God! So long awaited – so feared – so rejoiced – such release – such new tenseness – such excitement – such quiet – Well – darling – all of these feelings & emotions were expressed & felt by American people today – as you can well understand. People – & that includes me were torn by feelings of gladness that “the beginning of the end” has come – and with fear of great sacrifice. . . . The front page just had the following words splashed across the page – “Invasion Extra” – I brought a copy – As I got into the train – & thank Heaven! got a seat – looked at the rear page covering latest Bulletins – & there was General Eisenhower’s speech – [commanding] the real invasion. . . . Now to you – I hope you are alright – & I have shed only a few tears in my fears – But no matter what – dearest – I love you, love you, love you – & Falmouth St will be ready for your homecoming. . . . 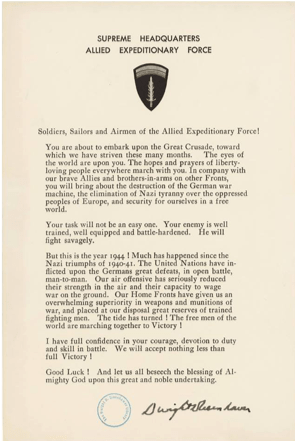 Better yet, also include some pictures printed at a local Target, CVS, or Walgreens. A 4x6 print will be somewhere between 15-30 cents, and you can normally get them in less than an hour, giving you time to shop in the store for care package items!

Just taking the extra time to write or type a letter will tell your service member that he or she is worth the additional time. That’s what United States Air Force Lead Navigator Second Lieutenant Jack Lundberg did for his family right before D-Day in case he died during the invasion. Sadly, he did die, two weeks after D-Day. As Jack had requested, his letter was forwarded to his family:

Dear Mom, Pop, and family, Now that I am actually here I see that the chances of my returning to all of you are quite slim, therefore I want to write this letter to you while I am yet still able. I want you to know how much I love each of you. You mean everything to me and it is the realization of your love that gives me the courage to continue. . . . I have always determined to show my appreciation to you by enabling you both to have more of the pleasures of life – but this war has prevented my doing so for the past three years. If you receive this letter I shall be unable to fulfill my desires, for I have requested that this letter be forwarded only in the event that I do not return. . . . We of the United States have something to fight for – never more fully have I realized that. There just is no country with comparable wealth, advancement or standard of living. The USA is worth a sacrifice. . . . Love to my family, Jack

Finally, letters are a way to connect with family and friends in a deeper way . Letters, especially handwritten ones, are more personal, as you get to see the individual’s handwriting, something that is distinctly his or hers! As a teacher, I quickly learn to associate the handwriting of a particular student with that individual. Likewise, your service member likely associates your handwriting with you, and it will make you seem that much closer to him or her.

You can tell the deep affection and love that Private Harry Schiraldi, a medic from New York who served with the 116 th Infantry Regiment, 29th Infantry Division, had for his mother in his last letter home, as he didn’t survive the D-Day landings:

Dear Ma, Just a few lines tonight to you know that I’m fine and hope everybody at home is in the best of health. I just finished playing baseball and took a nice shower and now I feel very nice. Hope every thing is going alright at home and don’t forget if you ever need money you could cash my war bonds anything you want to. This afternoon I went to church and I received Holy Communion again today. Getting holy, ain’t I? Well Ma, thats all I got to say to-night so I’ll close with my love to all and hope to hear from you very soon. Take care of yourself. One of your loving sons, Harry

You should also think about how you can help your service member write letters. For example, you might consider mailing your service member envelopes and stamps so that he or she can easily respond to your letter when he or she has time. I know my fiancé asked me to send stamps, which I included in a letter I wrote to him.

You might also want to consider sending blank birthday and holiday cards for your service member to send to other family members and friends. For example, I’ll buy a card (Dollar Tree has nice cards for 50 cents!) for a family member’s birthday or a holiday like Father’s Day, write a note in it, address it with a stamp, and send it in a package to my fiancé a month before the event so that he can write a note in the card and mail it back to the States. It’s a good way to keep your service member involved when he or she is away.

Today is a day for remembering. We should remember not only the sacrifices of those who died during the Normandy landings on D-Day seventy-four years ago but also the meaning a handwritten letter can bring to a service member, whether it’s Moe in 1944 or your family member or friend deployed in 2018.

If you’re interested in reading more D-Day letters, check out Andrew Carroll’s War Letters: Extraordinary Correspondence from American Wars! It includes letters from the Civil War up through the Persian Gulf War, but the largest section is from World War II. It’s highly recommend by renowned World War II historian Stephen Ambrose, so you know it has to be a good read!